What is the profile of the 2021 vintage?

The 2021 vintage was not an easy ride for winemakers, as the weather conditions posed a huge challenge. We take a detailed look at the issues that arose throughout the cycle.

Once again this year, a mild and rather dry winter promoted early budding on the vines, leaving them more vulnerable to spring frosts. The minus temperatures on the mornings of 7 and 8 April were very stressful, but fortunately did not translate into much in the way of losses at Château Brown.

Following this period of frost, we were faced with an extremely damp spring with record June rainfall of 230 mm, fostering development of downy mildew. However, this was handled well across all vineyards[1] with excellent timing – bravo to the team!

The summer season then took a long time to set in. A lack of sunshine or heat in July was combined with leafhopper attacks,[2] causing substantial damage to the foliage and delaying ripening in some areas.

Fortunately, the month of August was dry with beautiful sunshine. Beautifully warm and breezy days with slightly cooler nights helped ensure concentrated, high quality grapes. The end of the season was good, with a superb September and October! The 2021 harvests thus began later than the previous year, but in excellent weather conditions.

The first Sauvignon Blanc grapes were brought in on 10 September, and the last Semillon on 17 September. The yields were adequate (40 hl/ha). The whites completed their alcoholic fermentation at the end of October and began their period of maturation on the lees in barrels, where they will remain for eight months.

‘The Sauvignon Blancs are truly superb and very aromatic. The cool summer temperatures preserved their acidity and aromas. We are moving towards tauter wines than those of 2020, with greater minerality’ – Jean-Christophe Mau

The red harvests took place from 30 September to 12 October. The yields were lower (36 hl/ha).

We were left virtually unscathed by frost and downy mildew, but the small yields are doubtless due to the fact that our vines were subjected to significant stress throughout the majority of their growth cycle from the combination of cold temperatures, damp and lack of sunshine.

‘When tasted, there is gleaming fruit in the three red grape varieties (Merlot, Cabernet Sauvignon and Petit Verdot). The balance is rather good! Acidity levels are fairly high and alcohol levels (+/-12.5°C) are much more typical of Bordeaux than in the last six vintages.’ – Jean-Christophe Mau

For winemaking, we favoured gentle extraction and relatively short vatting periods (approximately three weeks) to preserve this radiant fruit and ensure greater softness and roundness in the future wine. The first running off began on Monday 25 October for the Merlot!

‘This is a vintage that should delight consumers. They will be fruity wines that can be enjoyed within ten years. They will be easy drinking and very well balanced, and not too powerful or alcoholic!’ – Bruno Patrouilleau 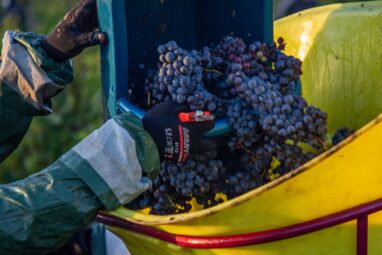 What would be a similar vintage?

‘The wonderful end to the season and also the very fruity nature of the wines, with the Merlot tannins lacking a little ripeness, reminds me of the 2012 vintage in Pessac-Léognan!’ – Jean-Christophe Mau

[1] First of all, we focus in particular on prophylaxis to combat vine diseases. This year, in order to effectively combat downy mildew we sprayed a horsetail infusion, performed leaf thinning and green harvests, and also applied copper-based treatments.

An assessment of the 2021 crop protection campaign: 68% organic and biological control products used.

[2] Leafhoppers are drawn to green foliage and when they bite the leaves their toxic saliva halts the flow of sap, causing the leaf to turn brown, reducing photosynthesis and delaying ripening. At Château Brown, we do not use insecticides to combat this pest, but rather an insect repellent (differs from an insecticide as it repels or camouflages). We spray a white clay onto the leaves to camouflage the vines and offer them natural protection.