Brown’s orchard is back!

You may only know ‘Pommeraie de Brown’ as the name of one of our second wines, but once upon a time Château Brown was also renowned for the quality of its apples.
In fact, a hectare-sized apple orchard (‘pommeraie’ in French) stood alongside the vineyard for several decades. These apple trees were uprooted in 1994, giving way to the beautiful Cabernet Sauvignon vines that were planted in 1998.

But we have decided to bring the orchard back…

In early January 2020, 36 fruit trees (apple, cherry, pear and plum) were planted on the western side of the vineyard, next to the apiary. This forms part of our project to plant trees and hedges. This action, among others, is helping to preserve and improve biodiversity.

‘The trees do not undergo any treatments, and the fruit is not intended to be harvested. The trees are havens of biodiversity, attracting bees, insects and birds, but are also fantastic carbon sinks.’- Jean-Christophe Mau

But planting trees is not always straightforward! As the soil in this part of the estate is very sandy, many of the trees did not grow well. Two years later, we decided on a new spot: in January 2022, the trees were transplanted to another part of the estate near to the floral farm, with cooler clay soils. 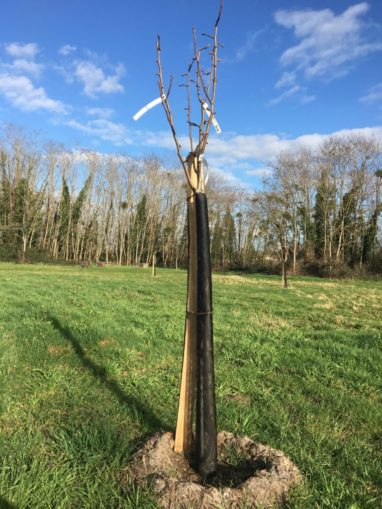